Firstly, I must apologise for the lack of posts this week…
University is getting unbelievably hectic with deadline after deadline approaching. Every Thursday for the next 3 weeks! The BF is in the same situation too so it’s pretty boring when we’re both on laptops, tapping away at the keyboard!
Of course there is one thing that makes it all better… 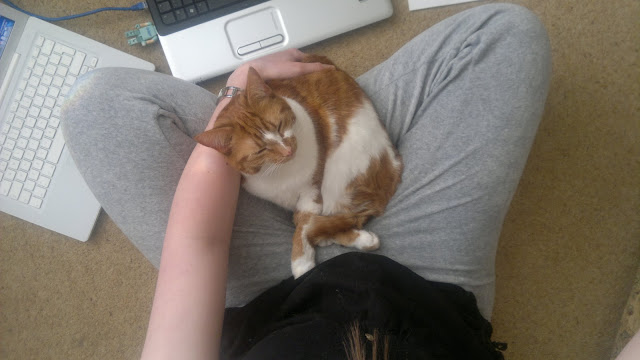 I love kitty cuddles 🙂 It’s like she knows when I need cheering up!
Secondly, it’s monday and this week’s theme is Genres… Well I am afraid to disappoint, but I found this week’s topic especially hard! All my life I’ve adored music; I play it, I listen to it, I write it… but that’s exactly the problem!
I love music so much that I just could not pick a favourite genre. My taste is eclectic and everchanging, so there was only one way of overcoming this dilemma…
To show you how much my music taste has changed over the years! Enjoy!
1) Aged 12 – Cheesy POP
I was obsessed with s club juniors (later renamed ‘s club 8‘). I knew every word, every dance routine and recorded every television appearance. I was 12 so I hope you can let me off for this one!
2) Aged 14 – Pop/Rock
Yes, admittedly I was a teeny bopper. I loved Busted and McFly and took up playing guitar. I suppose today’s equivalent are the Jonas Brothers or Justin Bieber.
3) Aged 16 – Rock
This was a natural transition. Most of my friends at school were in to rock and having got used to playing and listening to the sound of the guitar, searched for something more. So it started off with Green Day and eventually evolved into Bullet for my Valentine, Papa Roach, System of a Down, Funeral for a Friend, My Chemical Romance, The Used… etc.
4) Aged 18 – Pop/Punk Rock
I’m not quite sure what genre Fall out boy would fit into… it’s debatable… but they will forever hold a place in my heart for their upbeat tempo, metaphoric lyrics and ability to suit any mood I am in – their CD still makes regular re-appearances in my car’s CD player. I also listened to Cobra Starship and Panic! at the Disco.
5)  Aged 20 – Mainstream
University was a time when everything changed and I hate to admit it, but I changed too. I started going out!! Every Friday night the bar sold cheap drinks, all my friends were out and the DJ played the latest hits. Of course these were mainstream singles so my music taste took a U-turn and I discovered that I liked dubstep and RnB. Katy B, Chase & Status, Swedish House Mafia, Crazy Cousins… the list is endless.
However, Tinie Tempah’s ‘Pass Out‘ was the song that my friend Sophie and I would listen to (and recite each lyric along perfectly to) in the car. Oh how I miss those days…
6) Now – 90’s Rap
My best friend and I used to hang out in my car in the evenings – His grandparents would go to sleep early and we didn’t want to wake them so we used to sit out in the car, listen to music and chat. We called them ‘car parties‘ (what losers we were!)
He then introduced me to this really hot guy who he’d been friends with for years and lived down his road. After several times of meeting the hot guy, he eventually joined in with out ‘car parties’ and one day grabbed some of his CDs from his car to play.
This particular CD was made for him by one of his mates and had all the old 90s rap songs on. I still to this day don’t know how I knew some of those songs, but when I heard them something inside me just clicked and I KNEW the tunes and the lyrics. It was like the CD had taken me back to some kind of parallel childhood where I’d listened to Rap, because I had massive de ja vu.
Nowadays, I listen to more 90s rap than ‘the hot guy’ (who is now my BF!) and love Dre, Snoop, DMX, Spooks, Eminem… etc.
I still listen to all of the above (except maybe the first two!) and seriously, the contents of my iPod is so random!
So you can see why it was so hard for me to pick!